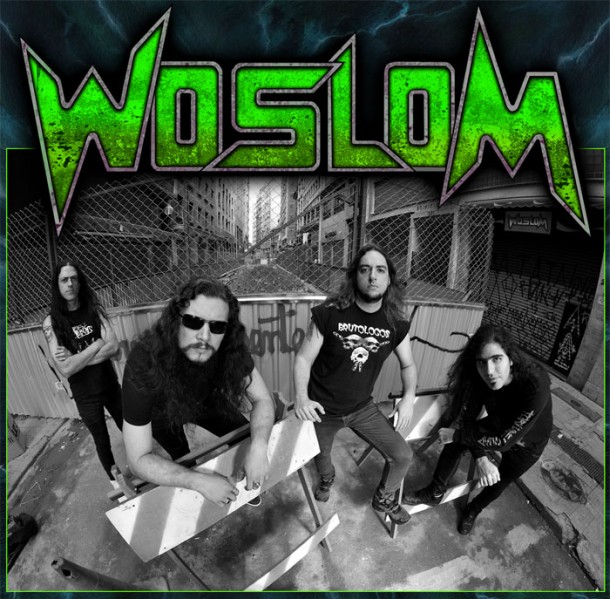 Coming from the city of São Paulo, the Thrashers from Woslom are ready break your necks! No kidding! The band really knows how to Thrash!
Pure “no bullshit” brasilian-style Thrash Metal! You need to hear it to understand. It is time to Tthrash!

Woslom is Silvano Aguilera (vocals and guitar), Rafael Iak (lead guitar), Francisco Stanich Jr. (bass) and Fernando Oster (drums), all of them coming from Sao Paulo in Brasil.
Their first album was released in November 2010 and was counted by websites like Wiplash.net and Novometal.com, Metal Militia (radio) and the Roadie Crew Magazine amongst the best albums from that year.

In 2011 the band appeared both on TV and in webcasts, but has also been playing more than 40 gigs in their hometown, the countryside and other parts of Brasil. Also, they were interviewed by Brasil’s most important Metal magazine: Roadie Crew Magazine. Another thing to mention is the amount of respect the band managed to earn with their high quality video clips “Time To Rise” and “Mortal Effect”, both produced and released in 2011.
Buisness-wise the band was able to start several important partnerships like with Diril Cymbals, Jam Cheese (equipment) and Screenstar (merchandise). The band is also working together with BLANKTV to get their clips on American TV and with DMR (Digital Media Records) to distribute the album outside of Brasil (USA and Europe) both as a CD and through online channels like iTunes, Amazon and similar stores.

In 2012 Woslom were on their first international tour “Time to Rise European Tour 201″. During April and May they played 25 gigs in 10 different countries, including Summer Festivals like SWR Barroselas in Portugal, Fields of Metal in Belgium and Emmen Metal Fest in the Netherlands. They also played in Sweden with Entombed.
After that the band concentrated on composing new songs for the next release.
Between October 2012 and March 2013 they produced their new album “Evolustruction” (recorded in Studio Acustica). The album follows the idea that there are always choices to make in life and that one has to constantly decide between good choices and bad choices.
The album will already be released this year (2013). Given the experience the band was able to accumulate the band promised to break all the rules! Evolustruction will be accompanied by a video going by the same name.
The CD will also contain a nice little extra from the Brasilian Thrash Metal band Mad Dragzer, while the download version will contain an alternative version of the song Evolustruction with different lyrics.