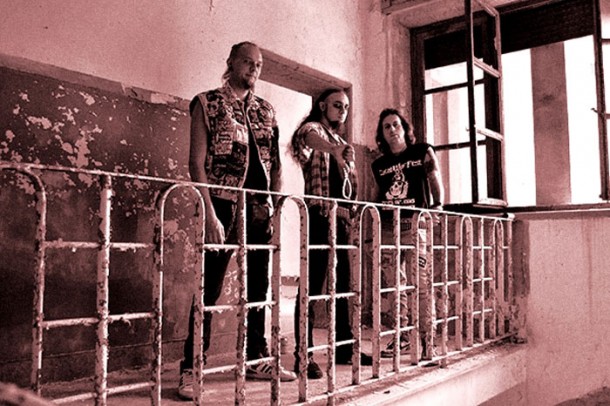 Nuclear Aggressor were born from the ashes of Violent Assault (RIP) on March 15th 2010 by the will of Fabio (guitar and vocals) and Chris (drums). In June of that year joined the band  Hellvis (bass and vocals) and released their first demo “Violent Thrashing  Rage”. Followed by several live events that lead them to share the stage with two Brazilian groups, Violator and Vulcano. During the winter of 2010 they come back in the studio for the recordings of the first EP, “Human Pulverizer”, which gets excellent reviews and numerous acclaim. The live activity continues and reaches its climax, the following year, with support from the legendary German thrashers Darkness. In autumn 2011, Nuclear Aggressor are in the studio to record 6 killer tracks to be included in two split-CDs, “Blasphemic Aggressor” w/Blasphemic Forces and “Osterreichisches KusterThrash” w/GraveLead. On October 22nd 2012 Nuclear Aggressor went to the studio to record the first upcoming full-length album, “Condemned To Rot”. And in the meanwhile on January the 26th 2013 they played in Hamburg(GER) with mighty Minotaur. At the beginning of June 2013, Cris decided to friendly leave the band due to personal reasons.
Just a week later, Luka (drums) proudly joined Nuclear Aggressor.