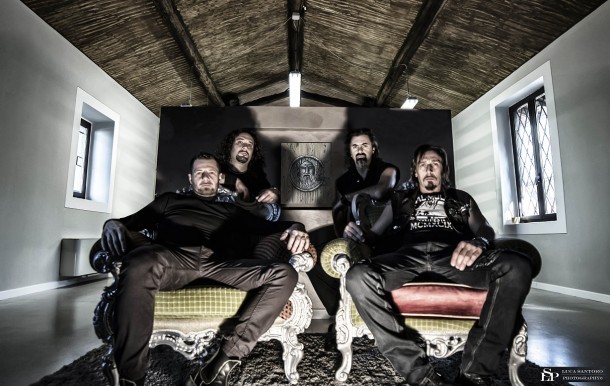 IN.SI.DIA are a Thrash Metal band from Brescia, formed in 1987 under the name Inviolacy. In 1991, the group entered the studio to record the first demo “No Compromises”. Band got great responses and has been noticed by Omar Pedrini which proposes them to record a new demo. In 1993 the band entered the Psycho Milan studios to record their first full-length album. The chance was to use italian language for the lyrics and so they also changed their band name in IN.SI.DIA to have a more immediate monicker. In September 1993 the album “Instinct and Rage” for the Polydor label was released. It was supported by a tour alongside Italy that reached the main locations including the City Square in Milan, where the Brescia combo closed the tour. In the same year the band supported Fight (Rob Halford frontman). In 1995 IN.SI.DIA entering Highland Studios, in Milan, and recorded “Look Inside You”. They had a long tour again to support it. In 1997 IN.SIDIA entered the new studio to record new songs but tensions between the components happened and the band finally splitted. In 2011 their past albums were reissued by Jolly Roger Records. In 2013 the band signed to Eagle Booking Live Promotion in order to promote their brand. Subsequently, the IN.SI.DIA are confirmed as headliner for Metalitalia.com Fest at the prestigious Live Music Club sharing the stage with At The Gates, Master and others. It is therefore the official comeback.