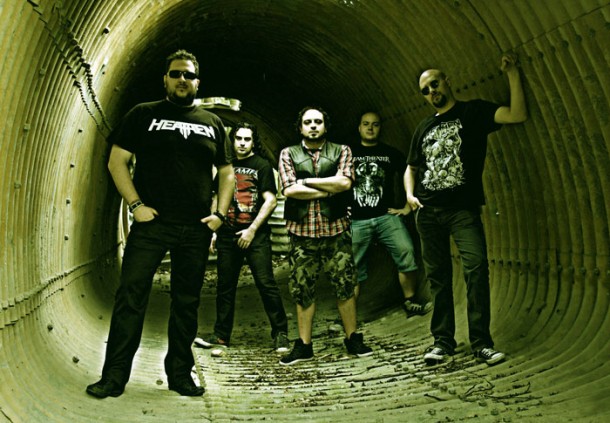 The project Ancient Dome was created in 2000. At the beginning, the proposal was concentrated on classic heavy metal, until it finally came to the construction of a new sound based on the Bay Area Thrash. The intent is to recreate the atmospheres of bands like Metallica, Megadeth, Heathen, Testament, Coroner, Artillery, Forbidden, Slayer, Exodus, Overkill and so on, mixing the thrash sound with melody and personality. In 2004, before the recording of the first demo “Once Were Thrashers”, Pech decided to leave the band, being replaced by the actual lead guitarist Ale (Alessandro Fontana – Guitars). In 2005 Ancient Dome recorded their self-titled EP, which obtained good responses from reviewers and (first of all) from metalheads, who started to follow and support the band. In November 2007, Ancient Dome started the recording session for the debut album, entitled “Human Key”, out the 15th of January 2009 for the Italian independent label Punishment 18 Records. Also “Human Key” acquired lot of assents, and thanks to the successful distribution from P18R, the name starts to be known in the underground Italian thrash circuit (proudly inserted between the acts of the so called “New Wave Of Italian Thrash Metal”) and worldwide. After an assiduous live activity, the band released the successor of the debut album, entitled “Perception Of This World”, out the 28th of September 2010, again for Punishment 18 Records. The 1st of June 2012, the new cd “Hunting The M.I.L.F.” is finally out for DeathStorm Records, an Italian independent (and really underground) label. After some gigs, including a gig supporting death metal legend Master, it’s time for a new production, out the 20th of May 2013, this time in a 7″ format, a split with our friends Metalheadz always out for DeathStorm Records, entitled “Blast From The Future”; two new songs are presented, along with the introduction of the actual line up’s first official recording session. In 2014, Ancient Dome released their third full-length album titled “Cosmic Gateway to Infinity” followed by the EP “O.W.T. …and Still We Are”.