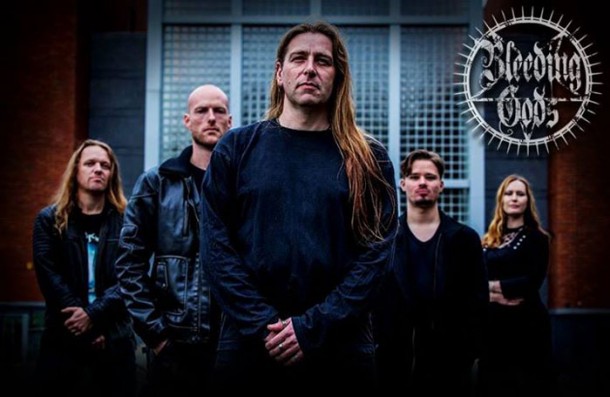 Grooving and shredding death metal from The Netherlands!
From the foundations of several Dutch metal acts like Sinister, Houwitser, Supreme Pain and Deadcell, Bleeding Gods was born in late 2012.   After he had left Houwitser in 2012, Ramon started to write a basic demo album.
When the pre-production demo was done, the time was there to look for the right people to join in. Some fellow metal-musicians, contacts from the past years on several festivals, club shows and tours were asked. The former bands of all the guys and girl were (technical) death metal and industrial bands, so the challenge to do something different this time was attractive. Less technichal, more groove and most of all; heavy.   Bleeding Gods plays grooving and shredding death metal with some thrash influences in it.   After a couple of rehearsals in the beginning of 2013, Bleeding Gods recorded their 4-track promo in early April. The lyrical theme of Bleeding Gods is about Ancient Gods, wars and history like the Mayans, Inca’s , Ancient Egyptian and Greek Gods.
With this 4-track promo entitled ‘Blood Symphony’, Bleeding Gods introduced themselves worldwide to the press, labels and audience. With the pre-production demo, Bleeding Gods got worldwide endorsement deals with ENGL Amps, Serpent King Guitars (SKG), Balbex and Cympad.   In September 2014 Bleeding Gods recorded their (10 track) new (debut)album ‘Shepherd of Souls’ in the German Soundlodge Studio together with the producer Jorg Uken.

“Shepherd of Souls  tells the story about the creation of life as we know it according to the words written in the ‘Popol Vuh’, which is all about the Mayan population. After several attempts, the God Huracán succeeded in creating mankind.”