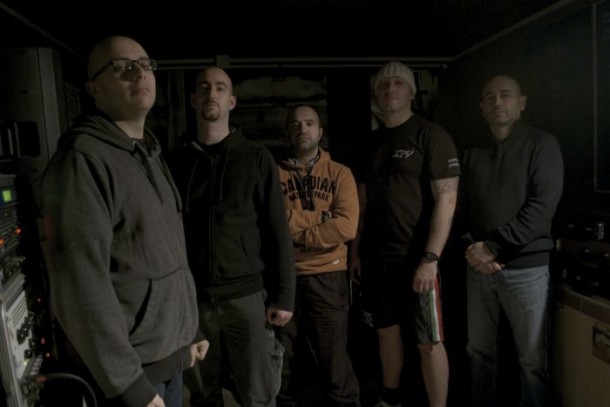 Bastard Saints were funded in 1997 by guitarist Fiorenzo Quintiero and frontman Andrea Marino. The name of the band was chosen after a track from Sinister and is meant to cause strong emotional impact, thus mirroring the duo’s musical intentions. On the same wave, the band logo was designed by Christophe Szpajdel, known for his work for other extreme rock groups such as Emperor, Moonspell, Nachtmystium and Enthroned. In 1998 the first demo “Hanged for a Blessed Masturbation” is produced, followed in 2000 by a split mcd with Christ Denied entitled “Disinfect with Terrorism”, published by Macabre Mementos Records (Vomit Remnants, Internal Suffering…). The cover shows a work by Joe Petagno, and bass-player from Nefas, Fabio, participates in this musical project. In the same year, Paolo Rossi joins the band, becoming their definitive bass-player.

2001 sees the publication from The Flood Records of “Ropes above an Abyss of Fury”, a split mcd in collaboration with Nefas, with whom they share the stage on a mini-tour organized to promote their latest work. In 2002 Bastard Saints, together with Nefas and Polish band Antigama, give life to a new compilation called “Grind Manifesto 2” and a European tour follows. Other compilations will follow through the years: Musik Terror Vol. 1 (Morbid Records); Brutal Assault 6.66 (Shindy Records); Propulsive Symphonies (France); Sadist Compilation (Indonesia); Horrorific Liquiscent Aftermath Compilation (Australia) and many more… In the same year, after numerous line-up changes, Simone Sgarella becomes the official drummer, keeping his position for the following ten years. In 2004 a new mcd “La Uno Bianca: Hydrophobia in Uniform” is published, and this time Bastard Saints got their inspiration from actual homicides that took place in Italy a few years previous at the hands of one criminal organization. A more violent version of “Friend or Foe” by Agnostic Front is recorded on this occasion. In 2005 Bastard Saints and Antigama meet again to produce a 7’’ split under the label Antiself Records, presenting “13 Stabwounds: Contemplating Death” and a cover from band Mortician. Many are the bands with whom Bastard Saints have shared the stage through the years: Cripple Bastards; Necrodeath; Purgatory; Nefas; Sanatorium; Antigama; Behemoth; Pignation; November; Cadaveria; Horrid; Mind Snare; Dysmorfic; Brainwash; Goreopsy; Necrophagist; Disgorge (Mex); Cerebral Turbolency; Inferia; Sickening; Hateful and many more…

In 2009, Bastard Saints land in St Petersburg, Russia, to take part in the Petrogrind Fest, gaining enormous success.
In 2010 Burning Dogma Records publish a collection of the complete work of the band from their beginning under the title “Inhale the Futuristic Filthiness”. 2012 finally sees the publication of their first full-length “The Shape of my Will”, under the label The Spew Records (division of Punishment 18 Records). No better title could have been chosen to represent more than ten years of hard work. Recorded in 2008 at 16th Cellar Studio, the album is a powerful explosion of all the musical and lyrical research of the band since their birth. Alberto Cutolo of Massive Arts Studio (Milan) took care of the mastering of these 9 tracks, as he had done for the rest of the work from Bastard Saints.
2012 is a year of change in more than one way: Simone, the drummer, leaves the band and a new guitarist joins in, Andrea Serrao. Tom Pagotto, already drummer for Nefas, offers his great experience to the group, thus completing the current line-up.