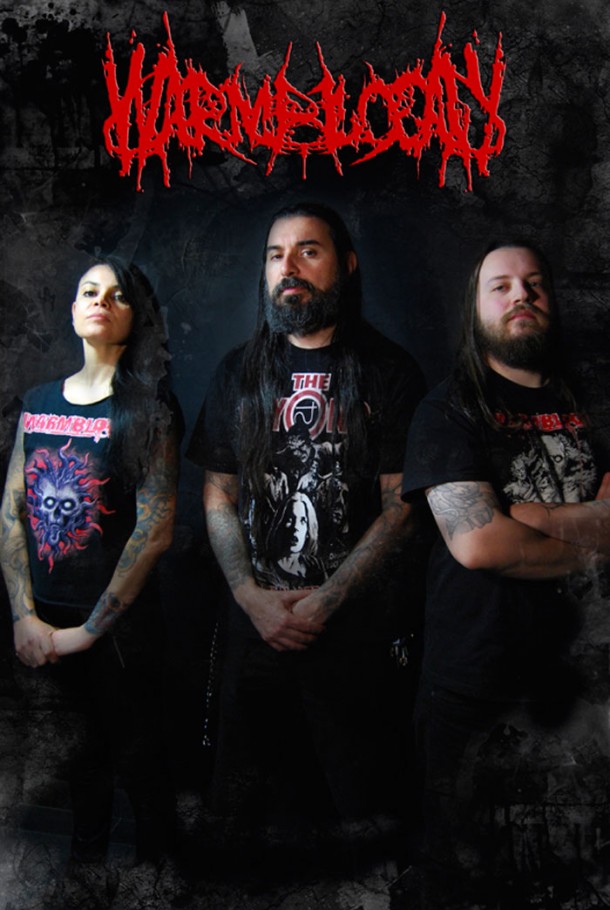 The warmblood set up in 2002, the band was founded by Giancarlo Capra (guitar and vocals) and Elena Carnevali (drums), to which is added Ivan Marconi on bass. In November 2003, the band recorded their first promo with the intention of blending the old 80s thrash and melodic death, with a sprinkling of classic american death.
In September 2006, Davide Mazzoletti joins the line up as second guitar player. With the addition of Davide the band find a new way of composing, more guitar oriented, intricated riff, arpeggios and solos. The new songs leave almost all the swedish melodies increasing the influence of Classic American Death Metal. A month later, the bassist Ivan Marconi left the band that decided to continue without the contribution of bass.
On May 2, 2004 Warmblood play in the first edition of “Tattooing Metal Fest”, the festival that will become the Tattoo Death Fest.
On May 19, 2006 Warmblood takes part in the “A chapter of Violence fest”. The song “Insane” extract from “Necrocosmos Destination” is included in the compilation “Spreading the sickness” vol 2 for the Mutilated Records.
Between the months of January and April 2010, the band completes the recording sessions for the second album entitled “Timor Mortis” always at the “Elfo Studio” (Piacenza, Italy). In april 2010 the band is very proud to announce a signing of a deal with Punishment 18 Records for the release of the new full lenght. “Timor Mortis” is composed of 10 tracks totally inspired by the films of Lucio Fulci and it was released in the september 2010.
In January of the following year Marco Lari (ex Blacksand) join the band officially as a vocalist.
Concerts to promote the new album sees the Warmblood share the stage with several great bands like Impaled Nazarene, Asphyx, Infernal War, Vomitory, Kraanium, Antropofagus, Psychofagist, Blasphemer, and many more, taking part as well in important festivals such as Tattoo Death Fest and Hellbrigade.
In january 2014, few week before the recording of the new album, Marco Lari leaves the band unsatisfied about the new stuff, too intricated and technic.
In february 2014 the band begins to record the new album, composed by 9 tracks more a intro.
The new full lenght “God of Zombies” was released in the late october under The Spew Records (a division of Punishment 18 records).

Between May and July 2017, the band completed recording sessions for their fourth album titled “Putrefaction Emphasis”.