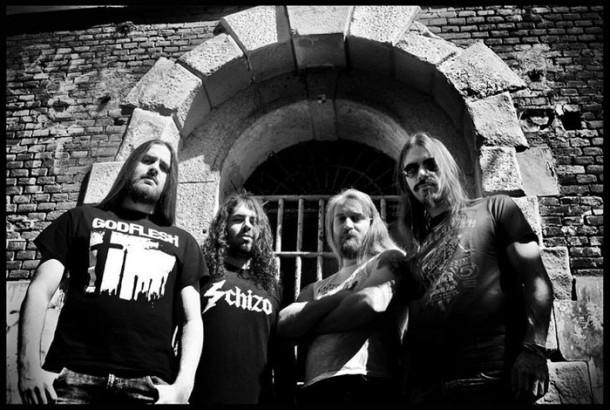 Total Death project started in the far 2000 by the will of Umbe (b), Max (v) and Teo (d) as a pure fucking thrash metal band in vain of the masters of european thrash metal. After many successions on guitar, Azzi (g) joined the band in 2003. With this line up the combo released one rehearsal demo tape and one 4-tracks demo CD (Thrash Division) later published by Roots Active Production (Thailand) and, as split with Slavator (Sweden), by Twisted Face Prod. (Norway). In 2006 Teo leaves the band and until 2008 the band it’s partially inactive. In these years the band takes part in some compilations such as Faster Than Sound 2, Underground Warrior
Compilation 5. The band tries to grow every day, according to the most personal inspirations and not caring to those who are the clichés of a particular genre. In 2009 the band hits the studio to record the first full length album “Well of Madness”, published by Ukragh Prod (Ukraine). In the last years the band has played live shows with great national and european acts as Necrodeath, Warhammer, Distruzione, Hyades, Death Mechanism and many more.
Actually the guys are writing new kick-ass material for the next album!