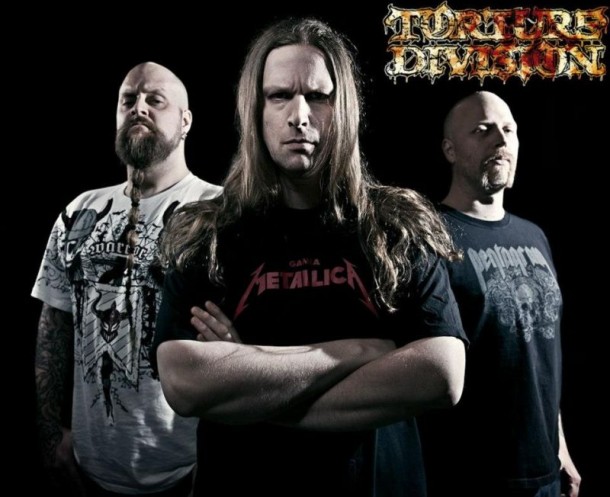 What is this?
We are Torture Division. We are an army of three. We are the world’s best death metal band, simply put. Lord K Philipson and Tobben Gustafsson decided that not starting a band together with Jörgen Sandström would be stupid. Upon being asked, Jörgen accepted the invitation and the band was born in the end of 2007. With over 60 years (and counting) of combined death metal experience you understand that we know what we do, we love what we do and that we will keep on doing it until the end of days. Or at least for as many years as we find the inspiration for it. Which quite possibly might be when the end of days arrive. So, in short… Torture Division is the world’s best death metal. And we have the merch saying so too. It might be sold out though.

What does it sound like?
You know, there’s a genre called “death metal”? We certainly belong in that genre. That’s what we do, we play death metal with tons of blasts, shitloads of groove and some thrashier passages that bands like Slayer only wish they could cook up. Including “Reign in blood”. If this is not a description good enough for you, well, check out the section at this site where we actually give you our music for free. Prepare to be knocked the fuck out.

What’s the goal with this?
To record three demos first. After that we’ll do the next trilogy of demos. And then we’ll do another trilogy following those. And another… And another… An album? We are not interested in recording an album at this point. We never were. Too many shit bands are flooding the market, bands who shouldn’t have an album out with their name on it. We are not willing to be a part of that and we wish that more bands followed our example. We have already turned down a bunch of labels who wanted to sign us, simply becoz we are not interested in signing a record deal, nor record a traditional album. We like to give the people free music, and in return we expect people to support us by buying our shirts and whatnot. The eventual profit we make from that will go straight into future demo recordings and the printing of new shirts. There’s not a single band of this caliber that was formed to give you music. Except for us. Torture Division is that band. “”-But”, we hear you say, “-You have an album or 3 out on some label(s), how do you explain that?”. Easy, those are compilations of our demo trilogies (and the first of those CD’s, “With endless wrath we bring upon thee our infernal torture”, includes our 2008 Christmas 7? as a bonus). We let them release it becoz they really wanted to and we got some free copies and whatnot to sell so we can finance further recordings and merchandise. The label(s) own no rights whatsoever to the material and if anyone else wanna release any of our material on a CD – go ahead. Just talk to us first so we can work something out.

And the current plans would be?
To play death metal, to record death metal and to perform death metal live to audiences everywhere.

I want you to play my club/festival/whatever. Who should I talk to?
You can find our contact information at this site. We are definitely eager to play more gigs so if you run a club or a festival in some country and want the world’s best death metal band to come there – hand over the offer and we’ll think about it. Remember though – we don’t wanna hear you say that you “have a no-to-very-small budget so we can’t offer much, but if you can play for traveling-costs paid and some food – you are welcome”. If that’s the case you shouldn’t be running a fucken club/festival and even more-so – not book any bands. Find yourself another hobby and do not bother contacting us. All we are asking for is a fair deal.