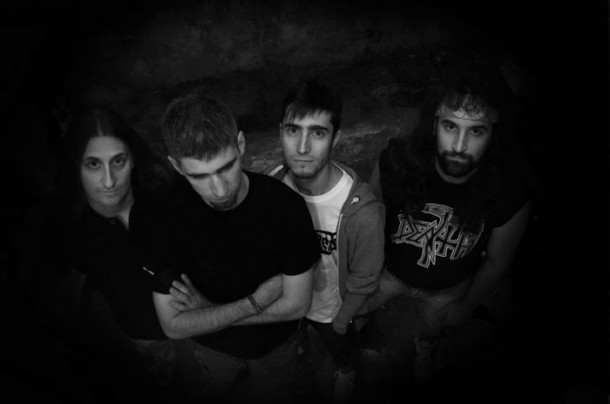 Soul Rape began their carreer in 2007 when Larry (guitars), and Maurizio (drums) started the band. After the line-up had been completed in 2007 (Guglio on bass, Moloch on vocals) the band started with their first demo ‘Primodial Paradox’ that got recorded in April 2008 at Diana Studio run by Davide ‘Axhell’ Colombo. After their first gigs Tambo joined the band in January 2009 as a second guitarist. Tambo also became the singer after Moloch left the band. 2010 saw another line-up change with Maurizio leaving the band, and Peter Bat taking his place behind the drums. As it turned out, both line-up changes added quite some force and power to the band!

After all those changes the band entered the studio (Dedolor Recording Studio, Turate) in July 2010 to record their 2nd demo ‘Gargoyles’. The demo was well received, but also showed that there was still potential for improvement. 2011 saw another line-up change with Guglio leaving the band to give him more time to improve his skills with the Cello. The place behind the bass did not stay vacant for long though with Dema taking over as the new bassist. Then, in September 2012, after several live gigs the band began to record the drum parts for their first album (RecLab Studio, Milan; Sound Engineer: Larsen Premoli). When the rest of the band entered the Alpha Omega studios something surprising happened: Guglio rejoined the band!

‘Endless Reign’ (Studio: Omega Studio; producer: Alex Azzali) features 8 tracks and can be considered a treat for every Old School Metal fan who likes the idea of a Heavy, Progressive, Black, and Thrash elements coming together in one single album. Two further treats are Dan Seagraveís (Morbid Angel, Hypocrisy, Malevolent Creation, and many more) and an outstanding guitar solo of a very special guest, namely Jeff Loomis (ex Nevermore) himself!