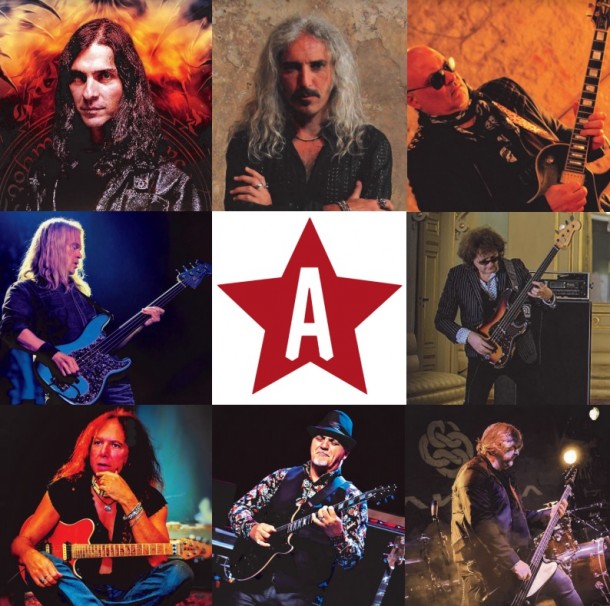 Secret Alliance starts initially as a solo project of the Italian guitarist and producer Gianluca Galli already founder and former of Mantra, Time Machine and Silver Horses, to name a few. Gianluca started working on the songs for the album with
the intention to explore the modern and classic heavy rock sound with some progressive influences. The drumming needed for such sound had to be very creative and technical.. and Ricardo Confessori was the right drummer. He joined immediately with enthusiasm and gave really his best drumming, also playing patterns and odd tempos never heard before in his bands Angra and Shaman. One of Gianluca’s dream was to involve one of the greatest bassist of the modern rock history, Tony Franklin, and Tony was happy to participate as well.
So the Secret Alliance took his form. There are other special guests who joined this record as Frank Gambale (guitarist of Chick Corea band), one of Gianluca’s influences, Alex Masi, the italo-american virtuoso guitarist, and two old friends as Andrea Bartolini, bassist of Mantra, and Andrea Castelli, first bassist of Mantra and Silver Horses.
The perfect voice for this music is Andrea Ranfagni, one of the most active and talented singers in Italy in the heavy rock scene, with also a background of international collaborations as Ian Paice band, Bernie Marsden band, Don Airey, Glenn Hughes and many others, being singer of Silver Horses too.
The songs have all a common line, a classic hard-heavy rock sound with modern progressive influences where the guitar riffs are the columns of the songwriting.
All the texts and atmospheres bring to a kind of science-fiction futuristic reality, touching arguments as the end of the world, the aliens and the secret space programs, the credences of the masses, the virtual-matrix reality, closing anyway the CD with a very ancient pray, Abun D’Mashaya, the original sanscrit version of Our Father, as the last significant sign of hope for humanity and this difficult world we are living in.