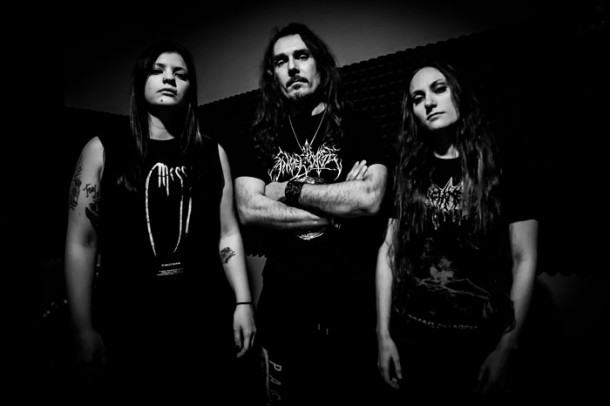 Psychotomy is a Death metal band from Venice (It), Born in 2010 from the common intent of Marco (drums), Irene (guitar) and Lorenza (guitar and vocals). At a first step, the trio – coming from different musical backgrounds – writes some thrash influenced stuff, which eventually gets in to more death metal oriented material. In the summer of 2011 Jek joins on the bass guitar and they record the first demo. After some local shows, in 2012 they enter the studio for their first EP ‘Transcend The Absolution’.
The sound is even more leaning to Death metal with the use of 7strings guitars but Jek decides to call it quits. Psychtomy then keep on as a trio. The band main influences are the Death metal big acts such ad Morbid Angel, Immolation, Napalm Death, Incantation, Dying Fetus…
During the years Psychtomy have shared the stage with some up-front underground bands such as Ape Unit, Devangelic, Profanal, Hateful, Natron, Dismorphic, Death Mechanism, Barbarian, as well as bigger acts like Asphyx, Ratos de Porao e Cripple Bastards.