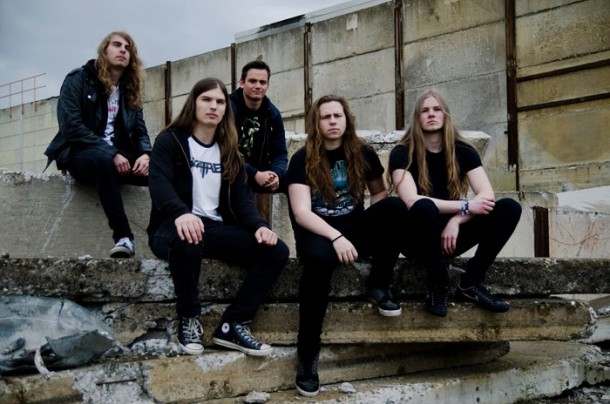 Prematory is a young band from Belgium founded in 2007 by Joeri Trescinski (bass), Joeri Van De Schoot (guitar) and Thomas Minnen (drums). After adding Simon Duson (vocals) to the group in late 2008, their first full line up was completed and several live shows were booked. The band would work on their material during the following two years. The studio sessions for the first album were booked shortly after adding Jonas Van De Sande (guitar) to the line up. Their debut studio release ‘Suiciety’ came out near the end of 2010. It was well received by the online press and resulted in support slots for bands such as Warbringer, F.K.U. and Dr. Living Dead. The band grew out to be a well known act in the Belgian underground scene and the first shows in neighboring countries such as Germany and The Netherlands were confirmed as well. Work on the second album started shortly after releasing ‘Suiciety’. Stronger and more professional songs were created and the bar was set much higher for the next release. A line up switch occurred halfway during the writing process. Thomas Minnen was forced to quit the band and a new drummer, Thomas Wuyts, was brought in to continue his work. At the end of 2012, Prematory felt that they were ready to record the second release. They contacted Sven Janssens (ex-Aborted) from the Red Left Hand studio to handle the producing and mixing. The album was recorded in February 2013 and was sent to Chris “Zeuss” Harris (Suffocation, Soulfly, Hatebreed…) from the Planet Z Studio to master the album.

‘Corrupting Influence’ marks the band’s evolution to a more unique mature sound and takes the listener on an aggressive journey about global, social and political problems in modern society.