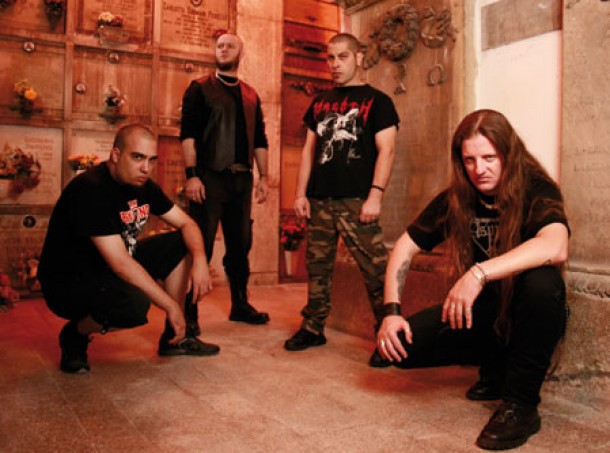 Phobic were formed in the South Italy in the winter of 1997 by Harian (vox and guitar), Nicko (Lead-Guitar), Carmelo (Drums), Joan (Bass). After a few months Harian and Joan left the band, replaced by singer Skull and Necros on the bass. The band gets its inspiration from Old Swedish and Classic American Death Metal with a quite personal and up to date style. In January 1998 they recorded a debut demo tape called “Over Turn the Cross” produced by Mark Urselli at Maelstrom Studios. In the same year the band’s track “Christian Lie” appeared on the tape compilation “Down of gods 3″ released by Metal Horse Prod. Meanwhile Necros switched to playing drums and Anthon joined as new bass player. In August 1998 they recorded another demo called “Advanced Tape 1998”, when Necros left Phobic and was replaced by Amon.

In March 1999 they signed with the Italian label Elegy Productions and in September 1999 Phobic recorded their first full-length “Sick Blemished Uncreation” released officially in 2001, a cult album in Swedish Death Metal style. After a lot of promotional gigs and five years of intense live activity the band split up. In 2003 Harian (vocals and guitar) reformed Phobic with Fabrizio (lead guitar) and the rest of the full-length’s line-up. Unfortunately when Harian moved to the North of Italy the band split up again. In 2006 Harian’s brother Robert (vocals) left the hystorical Italian Death Metal band Horrid and reformed Phobic with Vanny Hate (Mortifier, Buio Omega, Cerebra Infest, Wargore, Onirik, Collapse Within) as new drummer. After auditioning bassists for months, finally the band found Gabriel as new Phobic bass. Unluckily after many years of playing in the band and working on new material with pure Death Metal attitude, Robert “Hammer” officially left the band due to personal reasons and at the end of 2009 the singer Jericho (Brainwash, Collapse Within, Wargore) replaced him.

Phobic full-length called “The Holy Deceiver” was completed in december 2010.