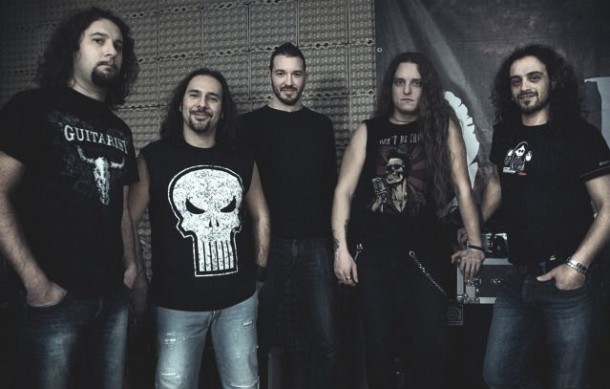 The story seems obvious. A short story, one like so many others …
In April 2008 Parla (drums), had the idea of​a new musical project, To create a new Heavy Metal band in Brescia, with characters from different musical realities … so that was he asked and obtained the “YES” From Marco (voice) and Mario (guitar / vocals) to join the project … “different from the usual” by gender and / or musical taste. Very soon the band took its final shape with the entrance of Cau (guitar) and Selva (bass).
So, it was decided to “Penthagon” … name based on the strength of each element of the band as a whole makes up a well-defined figure, without which it would not have a meaning. After the summer, returned from vacation, the quintet returned to the rehearsal room churning out new ideas and then composing new songs. All this until the end of the year.

2009 is a pivotal year because it allowed the band to perform in several Locations, becoming known and appreciated in many cases by the metallers.

So it was in 2010. Indeed, without any expectation, this can be indentified as the year of certainties. Know why in many of you. Among the various local gigs around, we decided to do a demo of 3 songs “good-enough” to subscribe to the WACKEN METAL BATTLE. Of course, the coveted prize was to attend the magnificent Italian band as W: O: A METAL BATTLE CONTEST 2010 … What would be better for an “unknown” band, without even an album assets WIN … and go on to play WET Stage per 20/30 minutes?!?! we can say now … ANYTHING !!!!!!!! After the preliminaries at Keller – Curno (BG) we have taken, with good agreement by the jury (and not only) the opportunity to try to reach the score.The final show, in Rome, we were conscious of being able to do well but we had to realize there were band totally different from us … (and 2 bands playing there were from that place).The performance was good and we had fun a lot, also because the Jailbreak deserved to be known as a very cool location for bands (then you know, once on stage, just have fun!) … So it was that at the end of the evening we left satisfied, as winners and “5 Useful Steps” to play at Wacken!

Having topped the dream,now the next target was to complete the track-list of what should become our debut album. So … to work in concerts and between one another we found ourselves with almost all the songs finished and only to be tested.

2011 arrived. This Year has been dedicated to the study and definition of the album. in March it was decided to concentrate complitly on it, on the playng “bloody” the songs, so we do not wanted to make them trivial to show that there was nothing for granted, in which every part of it there was the “signature” of us all! Obviously it was difficult as any serious project, there have been ups, downs and bad luck … but it is also true that all this work has led to a higher level than expected, as a preparation and dedication to what we call “our baby”.

At the end of June, after a period spent in PRE-produce the record, we entered a recording studio, in Vicenza. Parla, of course first, followed by Mario and Cau. After that Selva and at last Marco and Mario for the vocals’melodies… A big job… No time and NO MONEY! But sometimes it is true that studing and being well prepared sometime works!

The disc has been delivered in mid-August after the mastering session closer to the best sound and balance between all instruments and voices! A good job, even by those who have incurred us in any case for three weeks.