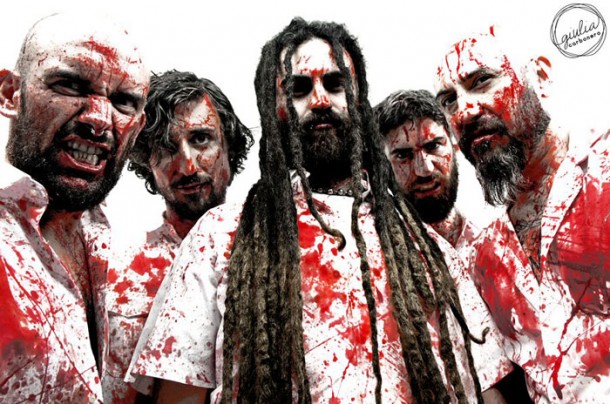 The band was formed in 1994 by the guitarist Steve Minelli. In March of the same year they released a demo ‘Grind Revolution in Mass Evolution’, which got excellent reviews into the music magazines. The style they played at that time was a mix between death-metal and grind-core enriched by very good technical and song writing arrangiaments. In September 1995 the Node line up was completely turned over, with the new vocalist/guitarist Gary DíEramo, new bass player Klaus Mariani, new drummer John Manti and Steve Minelli of course, Node released in December 1995 the second demo ìAskî. Being of an easier listening impact than the first demo, ‘Ask’ put Node into a music area much closer to bands such as Metallica, Slayer and Pantera. At the same time, this demo was published by italian label Lucretia Records.

The month after have been spent throughout Italy playing live on stage (also supporting Death in the italian gig of the Symbolic Tour!) with great rewards. Meanwhile the band was already working on new stuff but still facing same line up troubles; the drummer John Manti left the band in April 1996 for Oinos, (Thy Nature/Sadist) who stayed ítill December; Gary D’Eramo did the same in March 1997 due to deep differences of musical opinions; Daniel Botti, vocals, took his place. The brand new line up re-signs with Lucretia Records and in January 1998 releases the debut album ìTechnical Crimeî. Their new style is violent, strong, technical and aggressive. This sort of technical thrash/death has been really appreciated both by critics and audience. After this CD Oinos left the band.

The Winter 1998/99 was the darkest period for the band. Klaus Mariani was about to leave the band, who rests standing ítill March 1999 at least. In June of the same year Steve Minelli left the band. Despite the loss of one of their founder, Node, with great fortitude and band sense, kept on playing, to see their effort rewarded some months later, with the entrance in the line up of Joe La Viola (Gory Blister) and the recording of a new demo CD (June 2000) ‘Land of Nod’ which has provided the deal with Scarlet.

In August 2001 the recording of the second album has been planned in Sweden (Underground Studios). The new line up was: Daniel Botti (vc/gtrs), Gary D’Eramo (gtrs/vc), Klaus Mariani (bs) and Mario Giannini (dr). ‘Sweatshops’, this is the name of their 2nd full lenght, was out in February 2002 through Scarlet. The style seems to be a mix between the wide classic/heavy atmospheres with an obsessive and aggressive interpretation of the north-european death metal. Due to personal problems, Mario Giannini left the band in 2002. Marco Di Salvia (the new crazy drummer) took the place of Mario in September 2002: he play fast, furious and technical. 2003: Node played at Alcatraz (Milan) supporting Anthrax in March. In August they are ready to record a new album: ìDas Kapitalî. With a great production by Pelle Saether and Lars Linden @ the swedish Underground Studio, Node are running over the clichÈ of the genre. This album was a big surprise for all (fans & critics). They did also a promotional italian tour together with Lacuna Coil (March / April 2004). In this period they have supported Fear Factory in Turin in front of a thousand italian metal kids and they did a lot of gigs in Italy as headliner. Node did also a mini-tour together with Withering Surface and HateSphere (Autumn 2004) and they was also special guests @ Gryphon Party II in Zurich, supporting Agathodaimon (Winter 2004).

At the moment they are one of the more active and well-known extreme metal act from Italy. In the beginning of 2005, the partnership between Node and Scarlet was about to finish. The band decided to enter the studio anyway, without the labelí supportÖ Recording the fourth album, still at the Underground Studio. ìAs God Killsî is the name of the fourth full length album: recorded and mixed by Pelle Saether (Underground Studio), mastered by Goran Finnberg (The Mastering Room), it was published by the german label Massacre Records on 20 May 2006. This latest release is absolutely the most violent, aggressive and direct that they ever have recorded. Between september and october 2006 they toured Europe supporting their co-citizens mates Lacuna Coil and the finnish Poisoblack. Once they did this tour, their popularity grew up in Europe. Indeed, they was also confirmed at the important german festival called Battle of Metal (July 2007).

Unfortunately, the two-year period 2007/2009 is a very sad one for the band. In November 2008 Daniele Botti departs from Node after 12 long years and 4 albums together: it is, of course, a bad blow, but, as the saying goes, the show must go on. His gap is filled both by Beppe (Rex) Caruso, voice, and Andrea (Attila) Caniato, guitar, Node thus becoming a 5-people band for the first time in their history. They soon start working on their 5th album and, in July 2009, they enter the Syncropain Studios in Pisa under the supervision of the producer Marco Ribecai. Once again, they are unware of the bad storm looming on the horizon. Klaus Mariani, who has been in the band for 15 years, is determined not to record its bass parts for the new album and resolves then to leave the group for private reasons. Undaunted by the recent event, they have the bass parts recorded by Marco Rebecai while immediately searching for the new member who ends up being Gabriel Pignata. The band is ready for its great come-back on the scene. In October 2009 Node sign a contract with Scarlet Records which marks the turning point in the bandís history fueled by new motivations. ‘In The End Everything is a Gag’, the new chapter in Nodeís adventure is expected to be released on January 2010. After the release of ì In the endî The band Falled in another dark crisis period where the all new members left the band, But Gary replace all musicians in a period of 3 years and start again. The new and current line up is  Cn Sid – Vocals, Gary D’Eramo – guitars and vocals, Davide ‘Dero’ De Robertis – Bass Guitar,  Rudy Gonella Diaza – Guitars and Pietro Battanta – Drums. During March/September 2015 they record the 6th full Length with the producer Larsen Premoli (Destrage) at Reclab Studios in Milan and will be release in spring 2016.