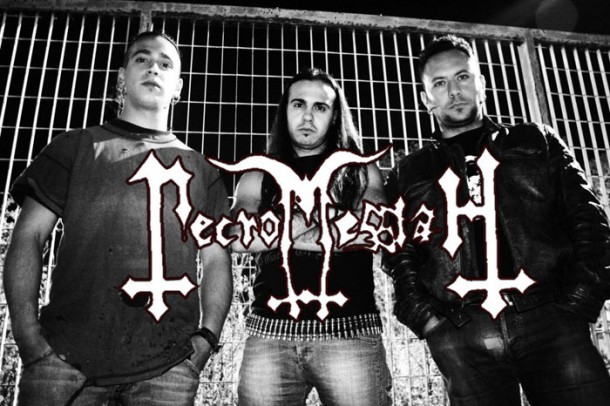 Necromessiah were born in the icy days of winter 2002…In may 2002 NecroMessiaH recorded their first demo-tape called ” In nomine deus quad ecclesias igne absumor”, that was a Early Black/Thrash 4 tracks demo-concept of antichristianism and blasphemy… During the recordings of the new tracks and some covers for the upcoming release, NecroMessiaH recruited a bassplayer whom with they issued their first full lenght in march 2004 called “Instar Gladii in corporem Christ…” out for Slava productions in december; NecroMessiaH had some gigs to show all their tracks on stage…so after that; N.w. left the band for personal problems and N.f. for job…NecroMessiaHs activity was stopped…after 2 years NecroManiac recruited 2 new members to keep on playing… NecroMessiaH after a promo cd’r with 3 tracks, recorded the new full lenght called “ANTIKLERICAL TERRORISTIK DEATH SQUAD released by Blasphemous Underground productions in Summer 2007 and by the unholy terrorbloody oath with Dewarsteiner, a split 7″ EP called “The Oath Of Bacco Militia”…..

After the last Promo Ep’s ” Get Ready ” (released in 2010) and ” Unleash Disorder ” (out in 2012) and a bounch of mini-tours in UK and Italy; Necromessiah signed for Punishment 18 Records for the new upcoming Full lenght ” The Last Hope of Humanity…” out in 2013 and Keep on Spreading Disease!