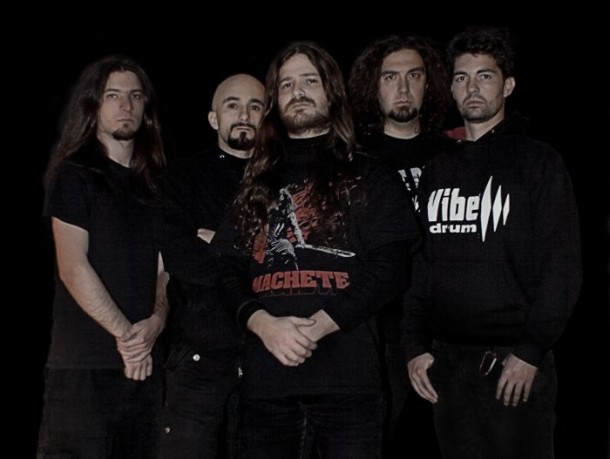 In 2003 the band recorded the first demo called “Demo till hell” and started to play live in mass meetings and pubs.

In 2004 the second demo “the day of pain demo…part 1″ has been released. In 2005 the release of the first Natrium album “The Day of Pain” distributed in Italy, Canada, USA, Brazil, Japan, Korea, Germany, England, Holland, Norway and other countries (about 800 copies). Aaron(vocals and bass) and Roberto(guitar) left the band due to personal reasons. In 2008 deep change of style and influences. Alessio Locci, guitar (Enemy – Heavy Metal) Lorenzo Orrù, vocals (ex Infector and Mutilation Trade both Brutal Death) and Lucio Manca (bassist of Solid Vision and Bremys & Singer of Bavarja) joined the band. In 2009 the release of “Inscribed in the victims scars” EP followed by several shows and a tour in the UK. The EP represent a transition phase from the old and the new style. After some changes in the line up the band composed heavier stuff, more technical and brutal, inspired by the masters of american Brutal Death metal and filled with Natrium experimentations. In october 2010 recording sessions of the new album at 16th Cellar studio (Hour of Penance, Fleshgod Apocalypse and many more) “Elegy for the Flash” The new 8 tracks cd recorded mixed and mastered by Stefano Morabito will be out soon. The cover art is made by Pär Olofsson (Deeds of Flesh, Disavowed, Hour of Penance, Immolation, Severed Savior, Psycroptic, Spawn of Possession, Immortal, Prostitute Disfigurement, Insidious Decrepancy, Inherit Desease, Braindrill, Revocation…….)