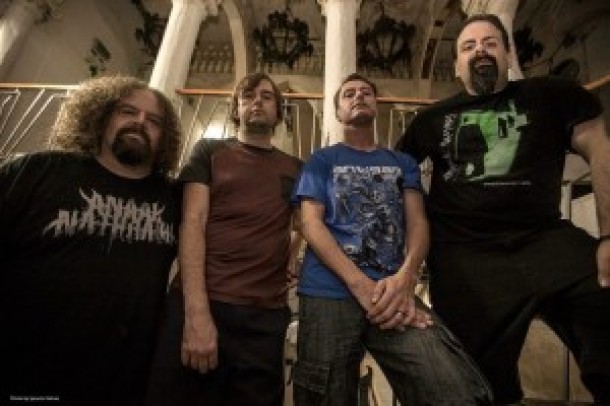 One of the founders of grindcore, also contributing heavily to the extreme spectrum of metal and punk. Many consider Repulsion the true founders and legends of grindcore, but this is debatable because technically Napalm Death formed before them.

Originally, on their first few demos, Napalm Death were a peace punk band going under different names such as Political Unrest and Civil Defence, but most of the band names were relating to political/social things. However, they decided to stick with Napalm Death because it was “different” and best described how they felt. The only track officially available from this era is “The Crucifixion of Possessions” from the 1984 Crass Records compilation Bullshit Detector Vol 3. After Broadrick joined the band, they began to incorporate extreme metal influences and eventually would evolve into grindcore.

Their main source of inspiration originally came from bands like Discharge, Siege and D.R.I..

According to Albert Mudrian (founding editor-in-chief of Decibel Magazine), Mick Harris first coined the term “grindcore”, although this is debatable. Also, Harris is credited with coining the term “blast beat” as well when describing his unique style of drumming (at the time). Countless metal bands have been heavily influenced by this style since.

For years the band was considered to be one of the most extreme bands ever. They were notorious during their grindcore days for selling out shows at the infamous Mermaid Club in Birmingham. They gave light to the club and created a huge metal/punk movement with their music in the UK. Such shows that were played at the Mermaid Club were with the likes of other grind and punk bands like Heresy, Extreme Noise Terror, Dirge, Ripcord and even had the chance to open for one of their main influences, Discharge.

Lee Dorrian was the “grindcore”-era vocalist for Napalm Death. He left the band later on the upcoming third full-length release because the band wanted to pursue a more death metal-influenced style. He later went on to form doom/stoner legends Cathedral. Because of this, Mark “Barney” Greenway was recruited from Benediction because he was their roadie while playing shows in the UK and had always been a long time fan of the group.

Napalm Death were one of the first signed bands on the legendary death/grind label Earache (Scum being the third album to be released on the label, cataloged at MOSH3.)

With the inception of the album From Enslavement to Obliteration in 1988, Napalm Death had, against all expectations, broken into the mainstream by debuting at Number 1 on the UK Indie charts, scoring the label’s first NME front cover and radio sessions with noted BBC Radio 1 DJ John Peel, who had typically supported the sound from its inception.

Lee Dorian was once asked to play with hardcore punkers Icons of Filth, which would’ve been his first band. He ended up buying a bass guitar to fill in the position, but the band broke up when he was ready to join.

No More on the Roster, Reissues