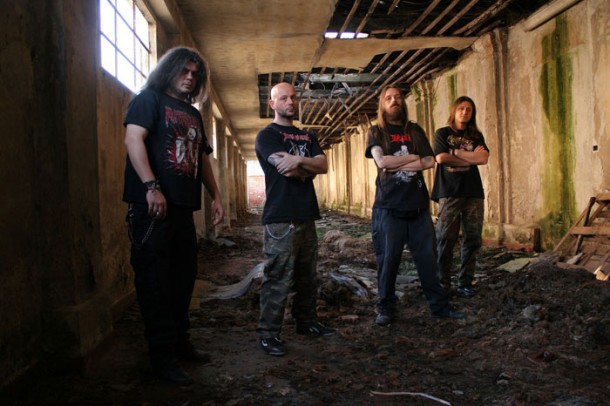 Today Mind Snare is one of the most influential Italian Death Metal bands, but the band’s story started way back in 1989 when the band emerged from the Italian underground scene of the late 80s. Over the first 10 years the band released 7 demo tapes before ñ finally ñ releasing their first MCD ‘Hegemony’ in 1999. Then things started to speed up when the Malaysian label ‘Psychic Scream Entertainment’ decided to re-release ‘Hegemony’ with 2 bonus tracks only one year later. In 2001 the band released their first full length CD ‘Hatefull Attitude’. Another year later (2002) the band signed a deal with the American label ‘Forever Underground’. In fact it was the first Italian Death Metal band to do so. In 2003 said label released the bandís second full length CD ‘The Noble Ancestry’, and another one (From Blood to Dust) in 2005.

After the deal had expired Mind Snare signed up with Cxxtbxxcher Records from Hamburg, Germany and released one of the best Mind Snare albums ever (Black Crystal Sun) in July 2006. Mind Snare even played live shows with some of the best international acts like Vader, Malevolent Creation, Suffocation, Kreator, and many more. In 2009 the band had planned to release another album with the title ‘Undergroundemons’ which was supposed to be a special 20th anniversary CD full of unreleased tracks. Unfortunately that was also the time when their label decided to call it quits which meant that the album was never released.

In July 2009 Mind Snare played their last gig with the old 2008-2011 line-up Gigi/Chris/Davide, as a support act for Marduk. After that Gigi left the band and was replaced by Derek on vocals. Fabio joined the band as the new bassist, and Sergio who had already played the drums on ‘From Blood to Dust’ and ‘Black Crystal Sun’ became the new drummer. After months of rigid rehearsals the band played the first gig as a support act for Necrodeath. Also, the band started to work on a couple of new songs were to be included on their promo CD-R from 2013 that they distributed for free at their gigs. The positive feedback from the audience gave the band the energy to start working on a new album that will also celebrate their 25th anniversary and 25 years of PURE DEATH METAL ATTITUDE!