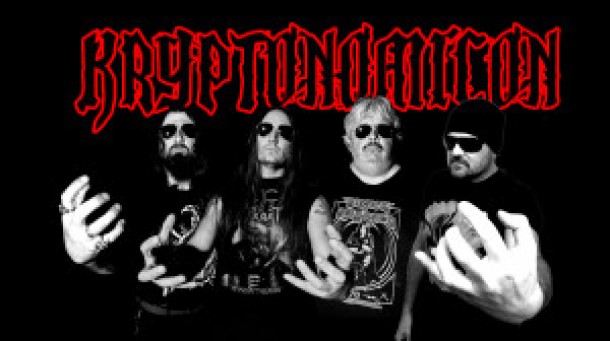 Kryptonomicon is an Italian death / black metal band, originated from Monfalcone in Friuli Venezia Giulia. The band was born in August 2019 from an idea by Stefano Rumich (guitarist and composer of the songs ) whose aim is to re-propose the typical sound of extreme bands of the 80s, taking inspiration mainly from Celtic Frost, Hellhammer, and Venom, Sodom, Destruction, Possessed, Bathory, and many others. Stefano Rumich (drummer of Karnak, ex Revoltons, Il Treno Degli Specchi, Endangered Pirates, and with other bands as sessionman) begins to write the first pieces and invites Luca Sterle (singer of Il Fauno Di Marmo,The Rebus, Le Carogne,Il Treno Degli Specchi, Murder Angels) who is responsible for writing the lyrics and singing. At the end of August 2019 the recordings of the first EP entitled “To The Abyss” (which contains 3 unpublished songs and the cover of a Venom song) begin at Stefano Rumich’s Angel Of Death Studio, who records the guitars, drums and the bass of each song, while Luca Sterle records the vocal parts.
After the recording of the Ep the band completes the training by enrolling on bass and backing vocals Frank Ponga (guitarist / singer of Karnak, and guitarist of AngelCorpse, ex Kurgaall) and on drums Diego Rossi (drummer of Warfare, Mortal Existence, Valhalla, Le Carogne and many others). On 31st October 2019, Kryptonomicon debuted live as support band for Necrodeath during one of the dates of their Italian tour, receiving an excellent reaction from the people. In this occasion the band invites the drummer Peso of Necrodeath for a jam together in the “classic” of Venom “Countess Bathory”.
In December 2019, the recordings of the second EP by Kryptonomicon, entitled Morbid Return, also begin at the Angel Of Death Studio. It contains 4 songs and wants to be a tribute to some fundamental bands of the genre. In January 2020, Kryptonomicon came into contact with the Punishment 18 label, with which they decided to sign a contract for the printing and distribution of their albums in Italy and abroad.