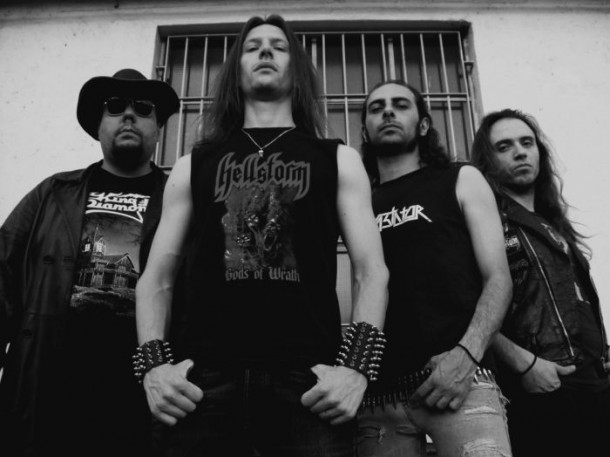 Hellstorm was formed in November 1995 by Hypnos (guitar) and Ares (bass/vocals) united in the intention to propose a Thrash/Death Metal influenced by Eighties style and bands like Venom, Kreator, Sodom, Possessed, Bathory, Destruction, classic HM sound of Mercyful Fate and Judas Priest. During January 1996 joins with the band the second guitarist Jessica, and together record the track “Hellstorm” for a Dutch compilation called “And The Raven Left The Tower” released by Teutonic Existence Record (are included also Golgota, Orthodox, Black Art, Uranius and others). In September 1996 the band find a stable line-up with the new guitarist Chelmis (from Orthodox) and Davide “Death” (still drummer of Irriverence) so they can focus to songwriting and live shows. ” Shadows of Unknown” is the first and only one demo-tape released, recorded at Malibù Studio in Milan during July 1997. It receives good reviews in Holland, Germany, Italy and Belgium and sells about 600 copies. Between 1998 and 2000 music activities go straight slowly for line-up changes (Davide “Death” leaves the band and Chelmis is replaced by Thanatos from Neophyte) and the unwinding of compulsory service. However Ares, Hypnos and Thanatos write others songs still on the fast and violent way and decide to produce by themselves their first album “The Legion of the Storm”. Davide “Death” comes back behind the drum and Hellstorm between January and July 2001 and the end of 2002 record their first full-length CD at Exodus Media with Danilo Bajocchi as Sound-engineer. The work is mastered at Massive Arts by Alberto Cutolo. The result is an album with the typical eighties sound and the power of the new millennium. On may 2002 the new drummer Phobos joins with band and gives to Hellstorm new enthusiasm and new vital strength to the songs, instead Thanatos leaves the band for personal troubles. “The Legion of the Storm”, after many difficulties, has been released on March 7th 2003. 11 violent thrash death songs and a special artwork makes Hellstorm proud about their work. As the first demo, The Legion was welcomed by the press all over the world. The band decided to continue its activity as a trio as the best thrash metal tradition. The following years was spent for promotion and live shows. They played in many important festivals like Tradate Iron Fest with Dismember, Milano Thrash Fest with Schizo and Thrash Disaster Festival with Death Mechanism, Torment and Raw Power. But line-up changes slow down band activities once again because Phobos left the band after two years and half. In the same period Ares had to stop singing for health problems. Obviously, they didn’t want to bury Hellstorm so they found in Hurricane Master (singer of Art of Silence) the proper interpreter to going on. Instead, many drummers took turns always cover the role temporarily until Phobos’ return at the end of 2008. In 2011 Hellstorm played at ROCK HARD FESTIVAL Italy with Coroner, Master, Onslaught and Necromass, and as opening act of Voivod, Wiplash and Helstar.

Thanks to the collaboration with Eagle Booking, Hellstorm inked their first deal with Punishment 18 Records on June 2012 with which release the second album “Into The Mouth of The Dead Reign” on November 2012.