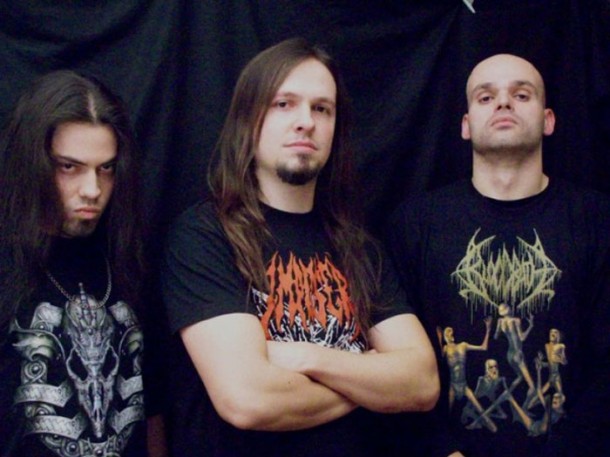 Hateful was formed in 1997 by Daniele Lupidi. He started to rehearse the first songs with a couple of friends, gaining experience and improving as songwriter and performer. The material was heavily influenced by old school european Death Metal and Doom Metal. In 1998, a more serious line-up permitted the band to do the first gigs and to spread its name around. The addition of two good musician like Matteo Manfredini (Vocals) and Marcello Malagoli (Drums) added the right motivation and strenght. After the first live appearance, the group decided to record four songs using the equipment owned by the guitar player Magoni. Just before starting the recording sessions Malagoli was forced to leave, after some problems with the other members of the band and was replaced by Antonio Keller. The other members (Matteo Manfredini-vocals, Luca Fortini-guitar, Daniele Lupidi-Bass and Antonio Keller-drums) entered another studio on May 2000 to record After the Last Breath. The mcd had a good response in the underground scene an was well reviewed by many fanzines and magazines. In 2002, things seemed to fall apart when Hateful dismissed Busi due to his lack of motivation. After a long period of frustration, long time members Matteo Manfredini and luca Fortini decided to leave the band to pursue other musical interests. Daniele Lupidi was the only member survived. In 2006 the band was asked to team up with Hellspawn (PL) and Impureza (FRa) for the release of a three-way split cd-r professionally printed by Gab of Nihilistic Holocaust productions. More than 3000 copies were spread all around the world and permitted Hateful to promote their music throught webzines and underground distros. The reviews showed the great potential of the two-man band, but the labels didn’t show any kind of interest. Daniele and Marcello decided to go on and start the recordings for the first full lenght album, entitled “Coils Of a Consumed Paradise”. Hateful showed their real live potential with many live appereance during 2009 and completed the recordings of the forementioned full-lenght album.