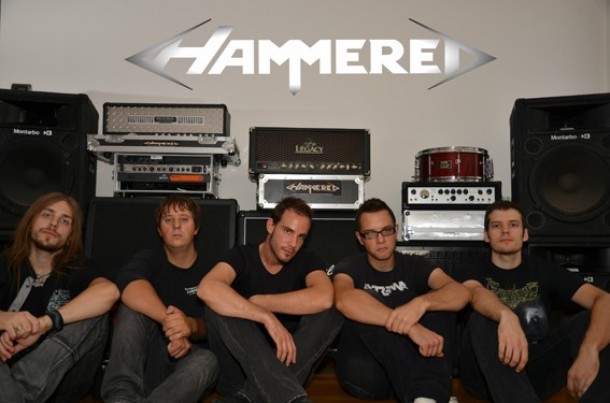 Hammered was formed in 2001 by Luca Cicuttin and Andrea Grasso. Originally the band name was “Trauma”.Soon the line up was completed with the addition of Mario Manganelli, Marco Cicuttin, and András Császár. Meanwhile, the name was changed to “Hammered”, since “hammered” is the perfect adjective to describe the attitude and style of the band. In 2006 Hammered recorded their first demo “2010 … Live The Terror”. In 2009 Luca Cicuttin and his brother Marco Cicuttin left the band for study. In the same year Alfredo Macuz replaced Marco on drums and Hammered come back to the studio to record a second demo, from which the song “Unexpected Consequence” was taken for the compilation “Kill city 18″, released by California’s 272 Records. Between 2011 and 2012 the band recorded his first studio album “The Beginning”; after the recordings Mario Manganelli decided to devote himself completely to his other band, and bassist Piero Macuz replaced him on the bass; with him come into the band Adriano Crasnich (on guitar).

The current line up is formed by András Császár on vocals, Andrea Grasso and Adriano Crasnich on guitars, Piero Macuz on bass, Alfredo Macuz on drums. On November 2012 Hammered signed for italian label “Punishment 18 Records”, which will release their first full lenght album “The Beginning”.