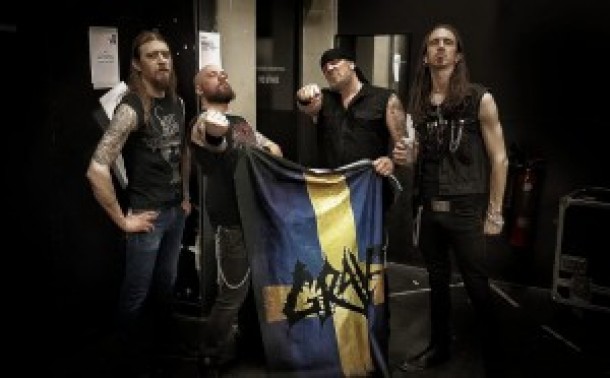 One of the longest-running Swedish death metal bands, Grave has created a sound and style which has been an inspiration on a number of the genre’s more promising younger outfits. Having started out as a band called Corpse in 1986, they released 3 official demos before their legendary 1991 debut. “Into the Grave”, established Grave as one of death metal’s most brutal new hopes, and its release was ensued by a host of live performances across Europe and America together with bands such as Massacre and Malevolent Creation, touring both in Europe and USA. 1992′s “You’ll Never See…”, the band’s critically-acclaimed second release, showcased their growing musical talent with a cleaner, stronger sound which appealed to a wider audience while retaining the group’s trademark heaviness. After unsuccessfully trying to fill the slot after bassist Jonas Torndal’s departure, the group made a collective decision to revert to their original three-man line-up, with the guitarist Jörgen Sandström switching to bass. They toured Europe with Morbid Angel and Dismember.

In 1993, Grave released “…And Here I Die…Satisfied”, a limited edition EP featuring brand new, rare and remixed tracks. The band made a European tour with Bolt Thrower. “Soulless” was recorded during the early part of 1994 at Stockholm’s Sunlight Studios (just as all of the group’s previous releases had been) with the producer Tomas Skogsberg. The band was touring with bands such as Cannibal Corpse, Death and Unleashed. They also made a 10 weeks tour in North America. A video was made for the title track Soulless which got heavy rotation on MTV´s Headbangers Ball, the biggest metal TV show during the 90´s. In 1996, Grave came back with “Hating Life”. The album featured a vocal debut of the guitarist Ola Lindgren, who took over the function following the departure of Sandström. Grave toured both the US and Europe to promote this album.

After the last tour the band had a hiatus until 1999 when they decided to play together again, they got the old member Jonas Torndal to join the band once again. The bass job went to Fredrik Isaksson. In 2002 the new album “Back from the grave” was recorded at Sunlight studios, Stockholm. After touring with the likes of Immolation, Goatwhore and Crematorium through North America, a headlining European tour with The Forsaken and Disinter, then followed by a slot on the tour with Exodus, God Dethroned, Nuclear Assault and Agent Steel, it was time to set to work on the next album entitled “Fiendish Regression”. The sixth album in the history of Grave was recorded with Coercion-Member Pelle Ekegren on drums after the departure of Jensa Paulson. Two European tours followed alongside bands like Cryptopsy and Aborted.

Back in Sweden, GRAVE entered the bands own Studio Soulless to record the album “As Rapture Comes”. Mixed by Peter Tägtgren in Abyss Studio. The album was released in 2006. The “Enraptured” Dvd was released in 2006. Two tours followed the release of “As Rapture Comes”. An eastcoast US tour together with long time friends Dismember and Vital Remains. Ronnie Bergerstål joined as a new drummer around this time. Then a slot on the highly anticipated “Masters of Death” European tour which also featured Entombed, Unleashed and Dismember. In May 2007 another European tour was launched, this time together with Immolation and Krisiun. Summer festivals and also a revisit to Mexico after 14 years. Also tours in Australia and Russia was made.

In 2010 the band’s 12CD+1DVD box-set “Death Unhallowed” was released and also the early Corpse / Putrefaction / Grave demos was released this year, entitled “Necropsy – The Complete Demo Recordings 1986-1991” In 2010 the band recruited Tobias Cristiansson (ex. Dismember) as their new bass player. Grave made a North American headline tour and also toured all across Europe together with acts like Misery Index and Obituary to promote their latest album “Burial Ground”.

In 2011 Mika Lagrén (ex. Facebraker) became the new guitarist for Grave. The band re-joined the Century Media camp again and released “Endless Procession Of Souls” in 2012. They made a European headline tour and a North American tour together with Morbid Angel and Dark Funeral. A tour in South America was also made. In 2013 they released an EP called “Morbid Ascent” and went on tour in Australia, Singapore, Indonesia, Thailand and Dubai. Another European tour with Marduk was made this year. The album “Out Of Respect For The Dead” once again recorded in Studio Soulless was released in 2015 and a tour with Malevolent Creation was made. The band also played in Turkey for the first time. In 2017 the new drummer Tomas Lagrén was added to the band. Grave made several gigs in places like USA, Canada, Lebanon and all across Europe.

No More on the Roster, Reissues