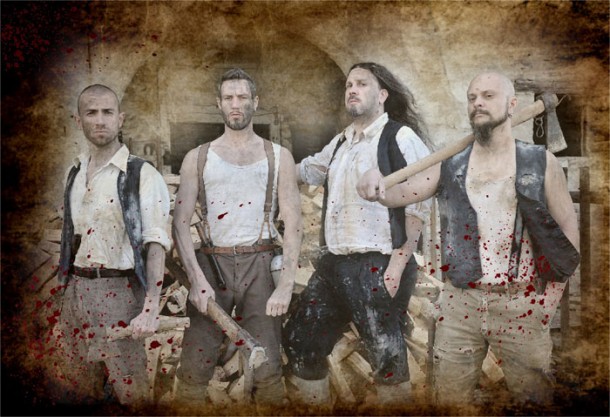 Delirium X Tremens was born in Belluno in 1998, in the shadow of the majestic Dolomiti mountains.

In 2003, with a stable line-up, they recorded Cyberhuman at the Majestic Studios (Scorzè Venezia): it’s a self-produced ep, a mid-tempo death metal album with the scientific concept of the annihilation of the human will.In March 2005, the Mexican label Asenath Records reprinted and distributed the Mcd in Central America, increasing the success of the band also abroad. In the meantime, the band was working on its first full length album, Crehated From No_Thing, the natural evolution of CyberHuman: here the operating speed and the rhythmical violence increase, while the atmosphere of the whole work becomes oppressive and obsessive.Compared to the other work, the band develops here the melodic parts of the album, uniting the various themes of the songs with a new malignant and sulphurous aura in a diseased way.

This time DXT spread and express their hate through the ill and distorted personality of a scientist, who’s obsessed with the secret of eternal life and the annihilation of the human will.The album is published in June 2007 by the Italian label Punishment 18 Records. From 2007 til now Delirium X Tremens became endorser of some important brands as Meinl,Vater,Evans,Spector bass,D’Addario,Trick pedals,B Guitars. The band play more gigs supporting more important acts like Massacre,Necrodeath,Napalm Death,The Haunted,The Vision Bleak,Ancient,Crematory,Asphyx, Belphegor … At the beginning of the composition of their second album, Delirium X Tremens are at a crossroads concerning the choice of the main concept, but this time their brainwave comes directly from their own native land: the Province of Belluno and the magical tops of the Dolomiti mountains are the real source of inspiration of “BELO DUNUM Echoes From The Past”. This album tells of past stories, legends and distant circumstances, events that happened in the whole Province of Belluno: this mixture gives life to a special work, which develops complex themes tightly correlated to a most advanced musical texture, above all thanks to the introduction of some typical instruments like flutes, violins and accordions and the employment of a mountain chorus. Delirium X Tremens go back to their own mountain area traditions, re-marking their refusal to technology, the leading instrument in this day and age. Everyone should listen to “BELO DUNUM Echoes From The Past” while reading it, looking at it, experiencing it. The beauty of the landscapes Delirium X Tremens paint in the songs and the appeal of the stories they evoke will enrapture you. This new work will be out on 24th October 2011 through Punishment 18 Records. After the release of their album the band started a new live activity playing in the most important Italian clubs and festivals.

In 2013 the band spreads its Dolomitic icy wind during the tour in Romania, Croatia, Bulgaria and Slovenia. The Canadian label End Of Light Records (www.endofthelight.com) reprinted “BELO DUNUM Echoes From The Past “ during the same year and distributed it in North and Centre America. In the meantime, the Dolomiti mountains keep on inspiring the band, who starts composing its third full length album. New stories and legends are converted in music, starting up again exactly where the last work stopped. The sound is now enhanced by more fascinating harmonization and arrangements linked to the local tradition. In February 2016 DXT start their work at The Crowns Studio. The atmosphere of this building, surrounded by the mountains of Belluno, give an special spirit to the recording, which is even empathized during the month of May 2016 thanks to the work of Larsen Premoli, the curator of the mixing and mastering of the album at his REC LAB studios.

TROI will be published on the 30th of November 2016; a Punishment 18 Records production again