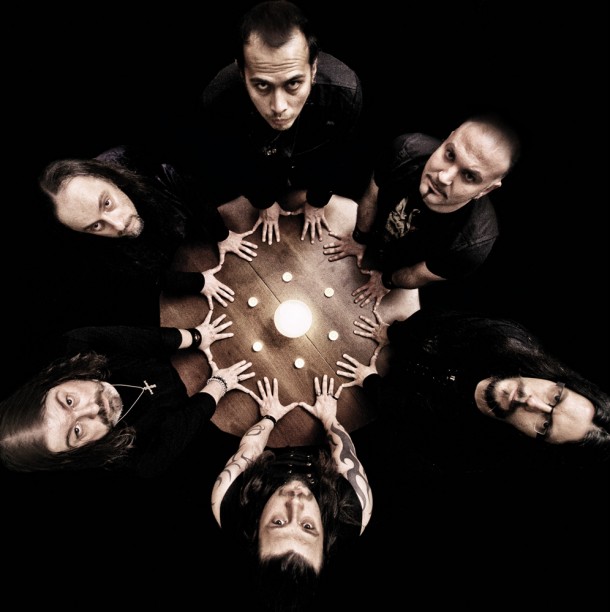 Some things are simply bound to happen. Crimson Dawn is one of these things. Dario Beretta (Drakkar) and Emanuele Rastelli (Crown of Autumn, Magnifiqat) had been good friends and fans of each other’s music since 1996, when they were both taking their very first steps into the music biz; it was only natural for them to finally come to create something together. Crimson Dawn took shape in the winter of 2005, with a mix of their musical sensibilities, ideas, and influences all forged in the cauldron of their common passion for Epic Traditional Heavy Metal. Between January and April 2006, the duo recorded the first promo-cd, A Dawn in Crimson, well-received in the Italian fandom. After that, the project was put on hold until the summer of 2008, when Dario made the decision to resurrect it and shape it into an actual band, adding a strong Doom Metal element to it. In the course of a few months, the new Crimson Dawn was born with Dario and Marco Rusconi on guitars, Luca Lucchini (ex-All Soul’s Day) on drums, Antonio Pecere (Betoken) on vocals, Emanuele Laghi on keyboards and Alessandro Reggiani Romagnoli on the bass. Crimson Dawn’s first full-length album “In Strange Aeons…”, recorded in Mat Stanciou’s Elnor Studio (Labyrinth, Crown Of Autumn, Drakkar) and mastered by Dan Swanö (Opeth, Edge Of Sanity) at Unisound Studio, took the heavy metal world by storm with its heavy riffs paired with epic and sullen melodies in October 2013, thanks to the well-known and respected underground Italian label My Graveyard Production. Responses from the press and fans were stunning and the album was pointed out by many in the Italian metal press as one of the best debuts of the year. In 2014, the band promoted their first official release by playing in great doom festivals like Italy’s Play It Doom Festival (with Solstice and Dark Quarterer, among others) and Malta’s Malta Doom Metal Festival (with headliners Officium Triste and Manilla Road), on top of supporting Swedish sensation Ghost for 2 packed Italian dates and showcasing their first video (for the song “Crimson Dawn”). 2015 was mostly dedicated to writing and recording new songs. Knowing that they had too much quality material to cram into just one album, the band began to think about the possibility of coming out with an EP. Upon receiving an invite for another great festival, the Doom Over Vienna fest in November, Crimson Dawn quickly decided that the occasion called for new songs to come out, and therefore decided to go ahead with the plan, also making the important decision to self-publish them. Coming out in October 2015, and again recorded by Mat Stancioiu at Elnor Studio, the EP “At The Cemetery Gates” included three new studio tracks, plus a live version of the (also) previously unreleased song “Checkmate In Red”, recorded at the Malta Doom Festival. In 2016, the 6-piece entered Elnor Studio with Stancioiu again to give birth to their second full-length record “Chronicles Of An Undead Hunter”. More varied, more personal, more doomy and more epic than ever before, COAUH is the bold statement of a band that is decided not to compromise on quality and freedom of expression in order to create even more captivating and personal epic doom metal endeavors.