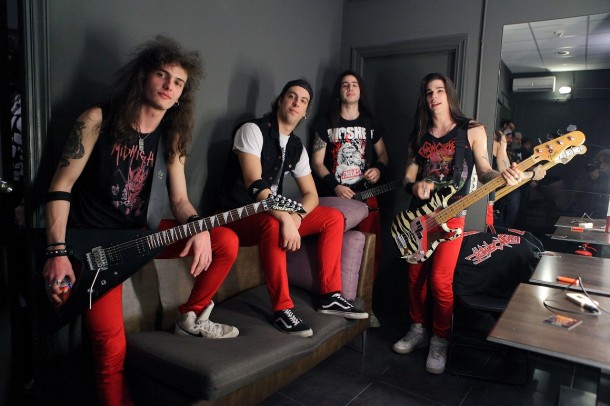 Chronosphere’s story starts back in 2009 when the band was founded by Spyros Lafias (vocals, guitar). In the beginning the band started as an old school Thrash Metal band, but since then the band has been developing constantly and can definitely be counted as a part of the new wave of Thash-Death Metal hailing from Athens, Greece.
After seveal line-up changes the band consists of Spyros Lafias (Vocals/Guitar), Kostas Spades (Bass/Backing Vocals),Thanos Krommidas (Drums), Panos Tsampras (Guitar/Backing Vocals).
Since 2010 the band is also a member of the Manifesto Music Movement and also recorded their first demo  ‘Hypnosis’ under the name ‘Homo Sapiens’ at the MIH (Made In Hell) studios. The demo was named after the song of the same name and also includes four other songs. Pretty soon it gained attention from the media in Europe (fanzines & webzines) and received favourable reviews. This was particuarly noteworthy as it was their first professional effort. This does probably also explain why all copies sold within just a few weeks! After the recording session the band started to promote its music with live shows, many of them as a support act for bigger bands from Greece.
A few months later the band started to compose new material for its first full length album.
The recording started in April 2011 and lasted for 3 months and resulted in the album ‘Envirusment’ that contains 8 songs and two bonus tracks from the first demo.