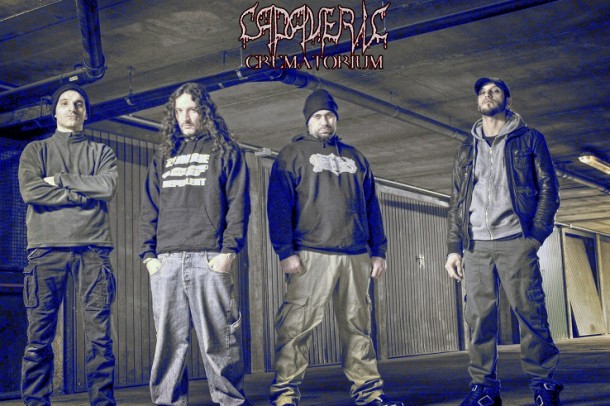 Formed in 1996, after several line-up changes, the band, featuring Parla (drums), Dr (vocals), C (bass) and Willi (guitar) recorded the 1st self-produced demo-cd in 1998 (“Cadaveric Crematorium”), which got them good reviews from everywhere and gave them the chance to play many gigs in their hometown (Brescia).

In 1999 C left the band and John filled in the low-end duties. In the summer of 2000 Jad joined the band on guitar, making the band a quintet. A few months later, with said line-up, the second self-produced demo-cd “Cry Now Motherfucker” was released. This record reached its purpose immediately, receiving very good reviews on magazines and webzines. From then on Cadaveric Crematorium name became to circulate in European underground metal scene, thanks also to their wild stage attitude and their song-writing, which allowed them to break the typical “cliché” of Brutal-Grind band. This was he reason why, in 2001, the band got involved in their first European tour with Belgian Prejudice and Sacred Sin (Por): the tour included France, Spain, Portugal, Germany, Switzerland and Austria.

In 2002 Cadaveric Crematorium won the national contest Headbanging as one of the best underground Italian metal band, contest managed and promoted by Hard Cash agency. This was another good goal for the band, since because of this award, they started to play gigs in Italy and abroad with bands of the likes of Necrophagist, Cephalic Carnage, Malevolent Creation, General Surgery, Goratory, Ancient, Mindsnare, Undertakers, Bastard Saint, Nefas, Snp, Cripple Bastard, Prejudice, Anthropofagius, Natron, Kataklism, Nyctophobic, Fleshless, Hypnos, Mastic Scum and many more. In the winter of 2002 the band hit the road again for their second European tour (Switzerland, Austria, Belgium, Germany and Denmark).

In the summer of 2003 John left the band and Necrom joined in as new bass player. The same year saw the band signing their first deal with the independent Austrian label Resound Gr!nd rec. and Cadaveric Crematorium recorded their first Ep at Nadir Studios, produced and engineered by Tommy Talamanca (guitarist of the legendary Italian death metal band Sadist ).

In the summer of 2004, in the same studios, the band recorded their debut album scheduled to be released around September 2004. Another European tour (Austria, Slovenia, Hungary, Germany) kept the guys busy.
In 2005 Cadaveric Crematorium broke the deal with Resound, because of total lack of information and communication and because of several delays in the release of the album itself. The sound is very personal and embraces technical brutal Death Metal US style (Suffocation, Dying Fetus), Grind-Blastbeats, classical Thrash-banging riffs, some melodic overtures and even old style Hardcore, every element balanced to create a killer wall of sound. The Italian label The Spew rec. signed with Cadaveric Crematorium and in fall 2005 “Serial Grinder” was finally released. The record got a really good feedback from press reviews and metalheads. It sold out and was reissued in the first months of 2007). Several gigs followed to promote the record and in 2006 the band took part at the Metal Battle contest.

Their next release, “Grindpeace” was released in 2008 for the uprising Italian label Punishment18 Records. The album confirmed once again the personal music style of the band and consolidated their role of one of the most insane bands of the Italian metal scene!

During 2008 and 2009 Cadaveric Crematorium played many shows as supporting act for Vomitory, Brujeria, Necrophobic, Illdisposed. In August 2009 guitar player P-Jad left the band due to personal reasons. At the end of 2009 after several months of auditions P-Jad was replaced by Mirco, a good rhythmic guitar player. The debut of new guitarist took place in December 2009. The band played the festivals A Cold Night in Hell supporting Obscura.

During 2010 Cadaveric Crematorium started their live activity playing a lot of shows and festivals to support Napalm Death and Suffocation. Between the end of 2010 to February 2011 the guitar player Mirco and the drummer Parla left the band due to personal reasons. Gerro, a young brixian drummer joinrd the band and Cadaveric Crematorium decided to continue as a quartet. The songwriting for the third full length continues and its release could be foreseen for the second half of 2011.