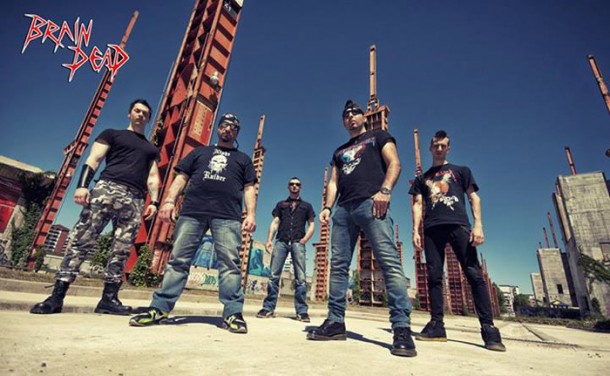 Brain Dead are a Thrash old school metal band from Ivrea, a small town not far from Turin, in Northern Italy.

The band was founded in May 2000 by Felix Liuni (vocals) and Daniele Vitello(lead guitar). Pier Bovolenta (rhythm guitar), Haron Zorzi (bass) and Daniel Giovanetto (drums) joined to complete the line-up.

Inspired by the bay area thrash metal sound of the 80s (especially by Exodus, Annihilator,Testament and Slayer), Brain Dead tried to personalize and create their own sound. Exactly because of the old school thrash influence, the band chose its name, Brain Dead, to pay homage to Exodus.

Their first demo, “Rage of Thrash”, saw the light in September 2001.Their second demo, “Double Face”, came out on March 2003, with a better production as well as striking songs. Brain Dead took part in and won a national competition to gain the chance to hit the biggest italian metal festival stage, Gods Of Metal, sharing stage with Slayer, Testament, Carcass and many more.

In November 2008 the band signed for Italian label Punishment18 Records for the release of their debut album “In the Deep of Vortex”.