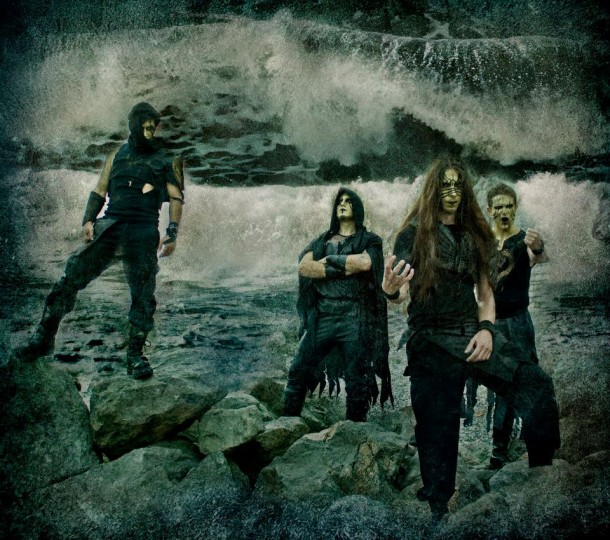 Azrath XI  formed in the winter of 2007 by the drummer Asmodevs Draco Dvx (Naer Mataron, Lost Soul) and Absu Tela Dagon, starting like a duo and than complete the line up in 2008 with the arrival of Dioskovroi  Deimos Faol (bass) and Svarog Lvpvs Triformis( voice). After several rehearsal and some concert (two gigs as support first to Belphegor and second to Impiety) in the spring of 2009 the band enter in the studio to record their debut album entitled “The Shrine Ov All Hallucinations” during the process Absu T.D. quits after the guitar sessions and  later Svarog L.T. for personal reasons, Asmodevs D.D. step behind the role of vocalist to finish the work on the album, mastered in 2010 at Imperial Mastering Studio (California) by Colin Davis (main leader of the death metal band VILE), july 2011 Slava Satan Satan records release the album worldwide.Siderevs Ocvlvs Mvndi  joined Azrath-11 as new guitarist on may 2010 and starting immediately to work with Asmodevs  D.D. to the new material in the late September Anthers Atras Exitvm (Karnak) become the vocalist. The rebirth of Azrath-11 on april 2011 saw the band playing on stage as opener for  the legendary Malevolent Creation, after other gigs they played with Vomitory and Prostitute Disfigurment.

In the beginning of 2012 Azrath-11 started the pre-production of their second album late recorded with producer Marco Falanga (Overtures) and mastered by Hertz Studio in Poland, the frontcover were made by Marco Hasmann (Fleshgod Apocalypse,Vile,and many others) bringing the band to sign with Punishment 18 records on the October of 2012, the title of this new opus is “Ov Tentacles And Spirals”.