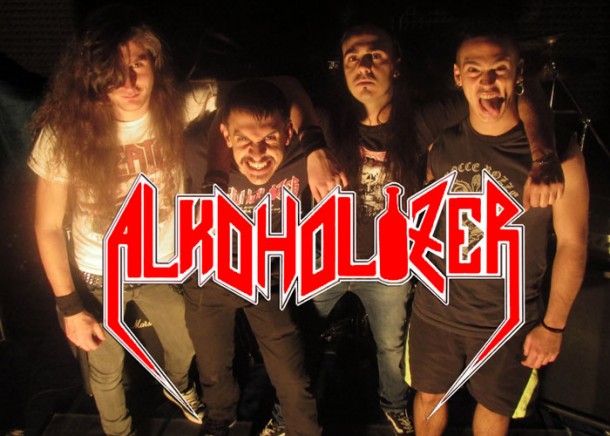 Alkoholizer were born in 2006 by the extreme passion for early thrash metal by Mark lizer and the singer Alex Lucariello….after an instantaneous 4 tracks demo called demolizer out in spring 2007 with Fabry Murdock at the bass and Gaber Tanda as the drummer, Alkoholizer started to play all over the place with some important bands of the UG scene in Italy.
After that,the first full lenght “Drunk orDead” was release by Punishment 18 Records with an huge amount of good ratings from foreign webzines and magazines. The activity of the band was stopped cause of personal tasks during 2011 to 2013….After that a brand new line-up has been recruited with only 2 members from the original one,so it goes:
Mark Lizer – Lead Guitars – (Old Member)
Fabry Murdock Bass (and now vocals too) – (Old Member)
L.Logan – Rhythm guitars
Paul Marcelo – Drums
suddenly in about 2 months,Alkoholizer released a new ep called “Sardinian Boars are Back” and a videcolip of the song “Faceless” taken by the same EP.
As well the on stage activity has been refreshed playing in some important festivals….the rest is to be written in the future…
The new album is announced to be released by the end of 2014 via Punishment 18 Records.