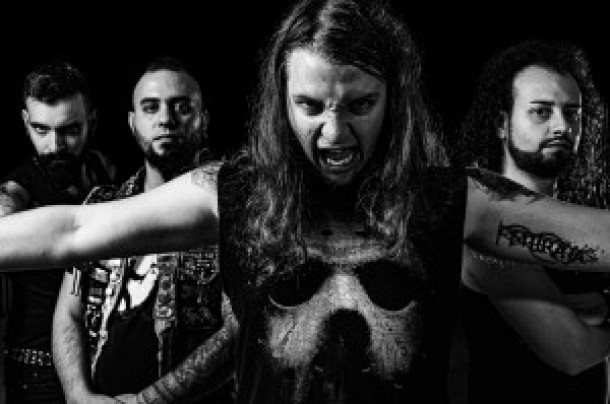 Reverber is an Italian thrash metal band founded in 2007 by young musicians united by one goal: to play thrash metal at maximum power. The band has a classic composition of thrash ̶ two guitars, vocals, bass and drums ̶ and proposes a sound halfway between the classic thrash of the Bay area and the more granitic one in northern Europe, thus creating a unique and modern project that continually does check with old school metal. Since the first full lenght of 2009, “Serial Metal Killer”, everything that you want from the old school thrash emerges, without ever neglecting those engaging melodies that seem destined to become a distinctive feature of the band.
After several line-up changes, Reverber return to the scene in 2016 with “Immortals”, an album welcomed by critics that allowed the band to expand its fan base, also thanks to the use of sinister scenes, characterized by disturbing heads of mannequin. The band released a video lyrics of the song “Kamikaze” in 2017

The band is not politically deployed, but has always shown a certain animosity towards the current global economic and political system, namely neoliberalism, financial elites and capitalist neo-slavery. To date, Reverber have organized numerous events touching numerous live clubs and carving out a good slice of popularity, which led them to share the stage with bands of the caliber of Nefilheim and Exumer, during a minitour in northern Italy and announced their support to Tankard for their minitour in Italy in March 2020.
The band is ready for the release of the third full-length, recorded at Stefano Morabito’s 16th Cellar Studio, of which the video of the title track “Sect of Faceless”. The massive investments in this latest production show how Reverber are finally cohesive and willing to start a professional career on the world metal scene.